The leaders of the BRICS countries, gathered for a live summit, had communication problems. Only the presidents of Russia, China and Brazil managed to speak without interference. The South African leader lost the picture, and the Indian Prime Minister lost the sound. Everyone, including Vladimir Putin, had to temporarily switch to sign language. However, in real life, the BRICS have no problems: all participants assured that cooperation is deepening, and the authority of the “five” on the world stage is steadily growing. 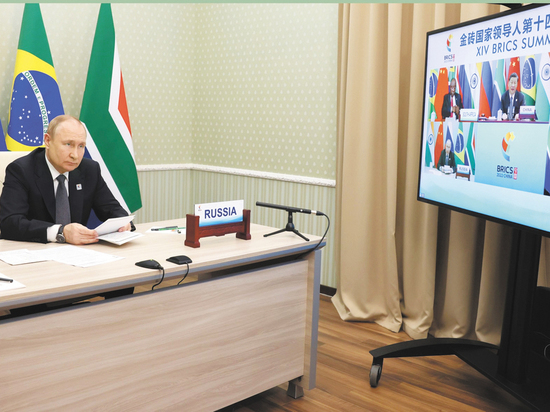 Unlike other international associations, whose members have been holding face-to-face meetings for a long time, BRICS continues to remain in a quarantine regime. Only the presidents of South Africa and Brazil actively travel the world. While the leaders of China, Russia and India prefer to stay at home and go abroad only in exceptional cases. Vladimir Putin took part in the BRICS summit from the Zavidovo residence, where Alexander Lukashenko has been visiting since Thursday. Since the communication between the two leaders, as Dmitry Peskov explained to reporters, is informal, it was not difficult for Putin to interrupt and get in touch with the members of the “five” at the appointed time.

The event was opened by Chinese President Xi Jinping as a host. Usually, the Chinese prepare very carefully for such meetings – they think over the cultural program, make up a special menu, and produce a variety of souvenirs. But now they are clearly not up to it: the country is in a permanent lockdown – when residents of some cities are briefly allowed to breathe fresh air, others are again locked within four walls. It is not surprising that Xi Jinping in his speech again spoke about the pandemic, as well as other topics traditional for Beijing – in particular, the construction of a multipolar world and the dangers of unilateral sanctions. The head of China called on BRICS partners to abandon the Cold War mentality and confrontation between blocs. “Thus, the large family of the “community of a common destiny for mankind” will outstrip a small group of hegemons,” Xi explained the historical mission of the “five” Xi, although in the current situation his wishes, frankly, look utopian: Russia is not going to give up confrontation with NATO and is not hides this.

When the camera showed all the participants of the summit, it turned out that they still could not do without souvenirs. The Chinese sent a cup to each president in the famous “tsinghua” technique (when white porcelain is painted with blue paints. – “MK” ). The four leaders had a present sitting idle on the table. And only Vladimir Putin, who a few years ago became addicted to green tea, sipped from a painted glass in front of everyone. The Russian president was the fourth to speak, and by that time it had already become clear that there were big problems with communication at the online summit. Translators were almost non-existent. And the image of South African President Cyril Ramaphosa periodically disappeared from the screen. Vladimir Putin said that the authority of the BRICS on the world stage is constantly increasing – this is due to the economic, political and human potential of the participating countries. The transnational nature of the challenges and threats, he said, requires joint responses. Well, Western countries, with the help of financial mechanisms, are transferring their own mistakes in macroeconomic policy to the world. “We are convinced that now, more than ever, the leadership of the BRICS countries in developing a unifying course for building a multipolar system of international relations is in demand,” the GDP said, noting that such an agenda would find support from many countries in Asia, Africa and Latin America. It is worth noting that the day before, the Russian leader was more specific and explained how BRICS is useful to Russia in the face of sanctions pressure. China and India are increasing purchases of Russian oil. Negotiations are underway to open Indian chain stores and supply Chinese cars. Russian IT technologies are in demand in India and South Africa, while space satellites are in demand in Brazil. On the agenda is the issue of creating an international reserve currency based on a basket of currencies of five countries. In general, the prospects outlined by the Russian leader are really good, but the reality is not very good yet. Exports of goods from friendly countries are not growing, but declining. As for oil, purchases have increased due to a large discount, which, taking advantage of the situation, Chinese and Indian companies negotiate for themselves.

The last speaker at the summit was Indian Prime Minister Narendra Modi. Judging by his face, he spoke with inspiration and enthusiasm, but, unfortunately, no one could hear him. Other presidents tried to draw the attention of their colleagues to the problem with the microphone: Vladimir Putin pointed to the button on the table, Ramaphosa shook his headphones, Bolsonaro made a “stop” sign with both hands. (One Xi continued to smile at the screen as if nothing had happened.) But this did not give a quick effect. Modi spoke into the void for about 2 minutes, until, finally, the organizers of the broadcast managed to convey to the Indian side in English that “other leaders of Mr. Prime Minister do not hear.” When the connection was sorted out, it turned out that Modi was also worried about the pandemic, but he hoped that the mutual cooperation of the BRICS countries would contribute to the global recovery.